The Royal College of Nursing has been having a difficult time recently, with claims of sexual harassment and wider cultural problems being investigated by a senior barrister. One commentator argues that information provided by the RCN, TUC and Privy Council suggests that the RCN is not a trade union. If the RCN is not a trade union it does not have to comply with the Trade Union Council’s best practice regulations. The fact that the Privy Council gives Royal College status but does not regulate bodies once they are afforded such status, means that the RCN is not regulated or overseen by any other body. It appears to be outside the law. Nurses who think the RCN protects them might need to review that assumption.

One thing leads to another

An NfN mole writes, in response to News from Nowhere 99: With regard to the ICS and anti-privatisation lobby, my guess is that  a proportion of managers and clinicians driving ICSs in localities ARE aware of “keep our NHS public” “Centre for Healthcare in the Public Interest” and other such groups and individuals who have concerns about creeping privatisation.

However, they are pragmatic people just trying to crack on with delivering ICS working with the policy and contractual and resourcing and staffing framework they have been given and thinking about needs of local population (and yes, of course – what it means for their organisation and their professional tribe and their work and their influence).

So they are not unduly troubled because they are pragmatists and doers rather than ideologues and thinkers (about policy at least).

Personally, as someone who is 100% pro a publicly funded, publicly provided NHS and doesn’t want more marketisation or privatisation and who is on the social democratic centre left politically and hates Toryism, I find myself alienated by the one eyed campaigning zealotry and self-importance and conspiracy lens of the arch anti-privatisers. And yet I also think they have often been proved right and I have proven complacent. e.g. with all the cronyism, contacts, contracts and key appointments around Covid.

News from Nowhere: We don’t think the crony contract stuff is an example of privatisation, or even marketisation, because there was no public sector provider being displaced. It’s corruption, we think.

NfN mole: ……apart from the fact that they could have pumped money into existing public health teams and let them do all the boots on the ground tracing which they are trained for and know their local patch

News from Nowhere: Yes, that’s an example of privatisation, assuming the public health departments did have the capacity and the pandemic preparations were truly in place – there seems to be some doubt about the latter.

NfN mole: ….but the sustained attacks on public health and local government funding and the failure to put in place adequate public health protection policy are ideologically driven….

The way, the truth and The Light

A northern NfN mole recently came across a locally prominent anti-vaxxer handing out a free paper called The Light, which describes itself as an independently distributed truthpaper, exposing corruption and crimes by governments, corporations and individuals that is people funded (whatever that might mean).

A recent edition included stories such as ‘Indian Crisis Likely Due to Vaccines, not Covid’; ‘All Covid Vaccines Should Be Discontinued’; ‘Debunking Smallpox: Vaccine Delusion’; and ‘End Face Masks and Social Distancing, Top Scientists Say’.

Previous editions of the paper, which is based in Manchester, have referred to global plots, a new world order, Bill Gates and mind control through vaccines. Its main argument is that the coronavirus pandemic is a hoax. 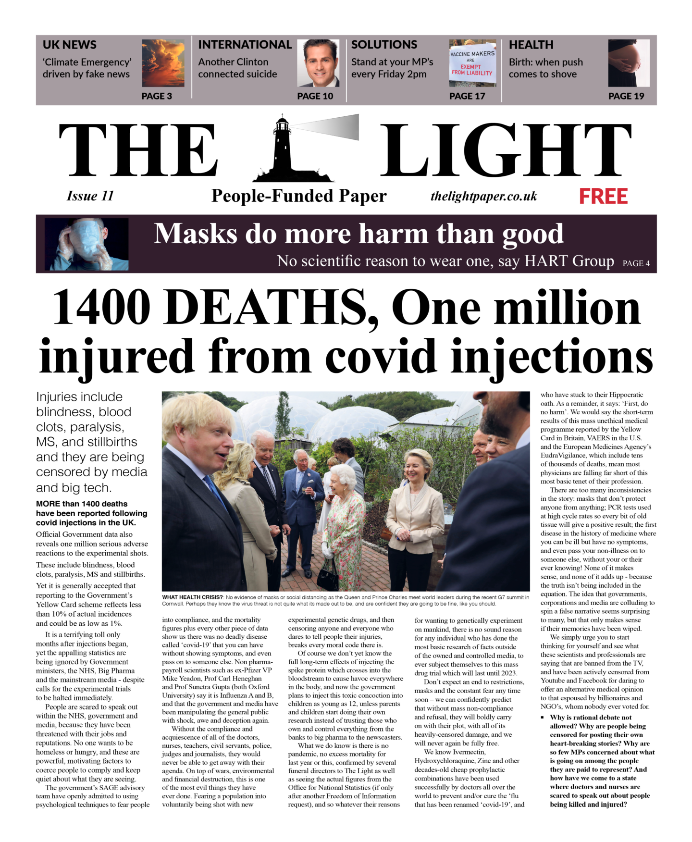 The Light seems to be distributed via a private Facebook group and Twitter contacts in which volunteers offer to post it through the letterboxes of neighbours. The Light is edited by a Manchester businessman who runs a business selling anti-vaccine T-shirts and 9/11 conspiracy merchandise. Founder and editor Darren Smith claims to have 5,000 volunteers (according to the Guardian) and a print run of 100,000.

The publication is known to have been distributed in London, Manchester, Yorkshire, North Wales, Cambridgeshire, Liverpool, Surrey and Leicestershire. It is also passed around at anti-lockdown protests and left at petrol stations (so at least there is something to read whilst you wait in line to fill the tank). The ability of anti-vaxxers to build a real-world, low-cost newspaper distribution network is paradoxically being made easier by tech companies’ efforts to clamp down on disinformation hosted directly on their platforms. NfN readers are asked to look out for this publication and alert us to its contents.

Read more News from Nowhere and articles on the NHS in ERA 3 at http://www.healthmatters.org.uk/